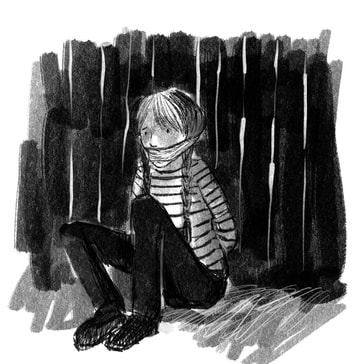 An adventure story for 9 - 14 year olds - narrated against a backdrop of the stunning scenery around the Gower Peninsula in Wales.

​“I can’t walk,” she said but her words were lost in the gag.  Evan glared at her, then shrugged and cut the rope at her ankles.  She tried to kick him but it was a pathetic, useless effort.  Evan scowled and pulled her towards the barn. Still holding her, he managed to open the padlock into the main barn and pushed her inside. He slammed the door after her and locked it again.
He needed to plan his next move. He sat down, leaning against the door.  He needed to get hold of David. If David didn’t pay up he would threaten to tell the police where the girl was. But how much should he demand?  Evan thought. Two thousand pounds would be very, very useful. He thought happily of what he could do with two thousand quid.  He checked his phone even though he knew there was no signal.  He got up. He would keep away from Oxwich Green and go down to Oxwich, phone David from there and get a snack for lunch.
As he drove away he remembered the kid brother. Had he been stupid not to take both of them?  There hadn’t been time: the snatch had had to be quick and it had gone like a dream. He grinned but he knew he had to get hold of David at once.
Kate, hearing the van go, sat on the floor of the barn, trying to bite at the gag and twisting her wrists to get rid of the rope binding them. She willed Michael to get in touch with Charlie and Emma and come and get her out of here.

Matt arrived precisely 12 minutes after he had rung off.  Charlie prodded Michael to wake him.
“I got hold of Rose,” said Matt. “MI5 and the police are swinging into action. We are not to do anything.”
“Huh,” said Charlie. “Let’s get Emma.”  He put two fingers to his lips and gave a screeching whistle.
Within a few minutes Emma came running at speed down the track from the farm.
“What’s happened? Why the emergency whistle?”
“Twin thing?” asked Matt.